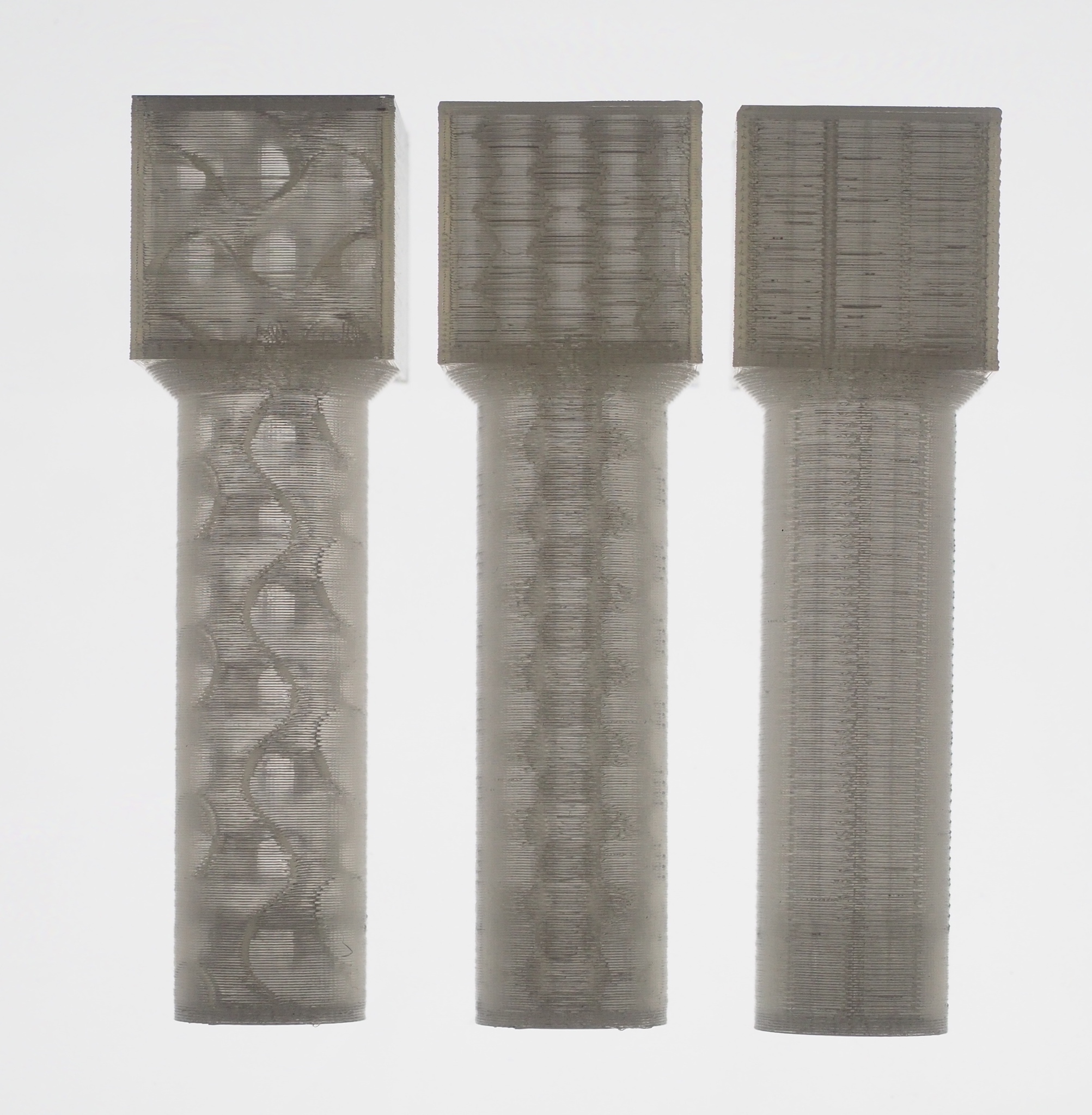 It’s sometimes hard to keep up to date on what is happening in the 3d printing world as new developments occur very rapidly. Occasionally, however, something new stands out. For me, the new gyroid infill looked very interesting when it started showing up in slicing software recently.

Several things stood out to me. It has no planar surfaces or sharp angles, and is renown for having a high tensile strength for low density.

Unlike some infill shapes, such as 3D honeycomb, it also looks quite “smooth” to print, with a typically smooth sin-type curve back and forth. This suggests that it may be able to print faster without generating as much vibration in the printer.

To test this infill, I generated a simple print, and printed 3 copies using an enclosed Prusa Mk3. An alpha version of Slic3r 1.40 was used to generate 3 prints, each with 2 walls, 6 top and bottom walls, and 10% of infill. The three infill types chosen were rectilinear, 3d honeycomb (my current favourite) and gyroid. The print material was transparent PLA from 3D Fillies (https://3dfillies.com), printed at 225º/65º C (extruder/bed).

To test the strength of each print, each print was clamped firmly at the base, and loaded with weight at the end of the arm until the part snapped. Initial test was done using 2L of water. It turns out that wasn’t anywhere near enough, so the rig was beefed up using a 9L bucket.

Results were as expected, with the strongest infill being the gyroid, achieving a marginal strength increase over the 3d Honeycomb, while using less filament. Rectilinear was poor in comparison. While it used a similar amount of filament to the gyroid infill, the strength was significantly less, snapping at 79% of the load of the gyroid infill. One other interesting point, potentially demonstrating how much better the gyroid infill is at absorbing stress, is that when it eventually snapped it was a much more “kinetic” breakage than the other two, with the snapped piece of plastic ricocheting around all over the place (so wear safety glasses when doing this sort of thing :P).

Print times didn’t correlate to print weights, with 1h18m and 1h19m for the rectilinear and 3d honeycomb respectively. The gyroid infill was faster, coming in at 1h11m.

Final results? Well, it’s pretty clear that out of these three infill types, gyroid is the best, achieving similar strength to 3d honeycomb, while using significantly less filament. As  the perimeters will weigh the same for both prints, and the infill only weighs ~35% of the print, then the gyroid infill weighs around ~78% of the 3d honeycomb infill. That’s a pretty significant saving for many prints, and you probably gain a stronger print, and the gyroid infill takes less time. It’s pretty hard to recommend rectilinear for anything. It’s rather  fragile in comparison to the other infill types. It would be interesting to see how the various infill types hold up to a crush test, but I don’t have the equipment for that.  Most surprising result from the test? That a tiny piece of 2 perimeter, 10% infill plastic can hold 9 kg.